And the millstone turns again!

Like so many farms in South Tyrol, the Unterpfaffstall Hof also has its own mill. This has been used since time immemorial to grind the grain cultivated on the fields of the farm into fine flour. 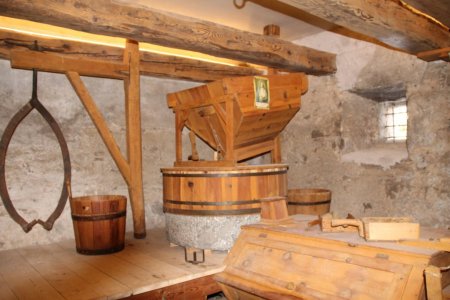 A mill was one of the most important facilities for a farm and therefore has avery long tradition where it was possible to operate a millstone with water.
Where this possibility did not exist, grain had to be ground into flour by the miller in community mills. However, this was tried to avoid, because no farmer wanted to let his grain, his most valuable commodity, out of his hands. The miller‘s trade belonged to the dishonest estates, and the miller was accused of fraud and theft. This also explains the high mill density of our country.
Also at the Unterpfaffstall Hof the mill has a long history. Old photos prove that originally there was a water operated mill at the creek behind the house. As the creek did not have much water, a dam was built above our farm in the „Rialingerwiesl“ and the water was dammed. The remains of the dam can still be seen today.
From time to time the water was then allowed to flow and all the mills along the creek could be operated one after the other and flour could be ground.
At the end of the 19th century, the dam broke out in a severe storm and was no longer built. Probably the farm‘s own grain was then ground to flour by a miller in the vicinity.
In 1955 a new mill was built in the cellar of the farmhouse, with the original millstone sill existing.
This mill was now powered by electricity and the grain could again be ground on the farm into valuable flour and „Grischen“ (bran for the cattle).
After a few years of standstill and the expansion of the mill in 2015, wehn the farmhouse was rebuilt, we rebuilt the mill last winter with loving attention to detail and sweat-inducing work, by inserting and setting the millstone and put it into operation fully functional.
During visits to our small farm museum and the mill, flour and „Grischen“ are again ground for demonstration purposes and to preserve customs and traditions.

To our joy the millstone turns again! 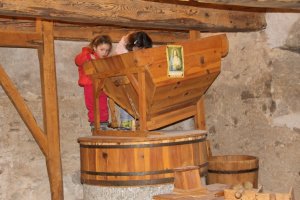 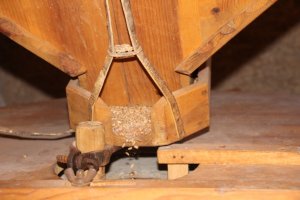 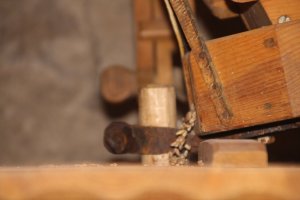 Holidays in South TyrolFarm holidays in South Tyrol, DolomitesFarmstay in ItalySüdtirol.info5.0
The European Directive 2009/136/EC (E-Privacy) regulates the use of cookies, which are used also on this site! By using our website or by clicking "OK" you agree. Further information
OK